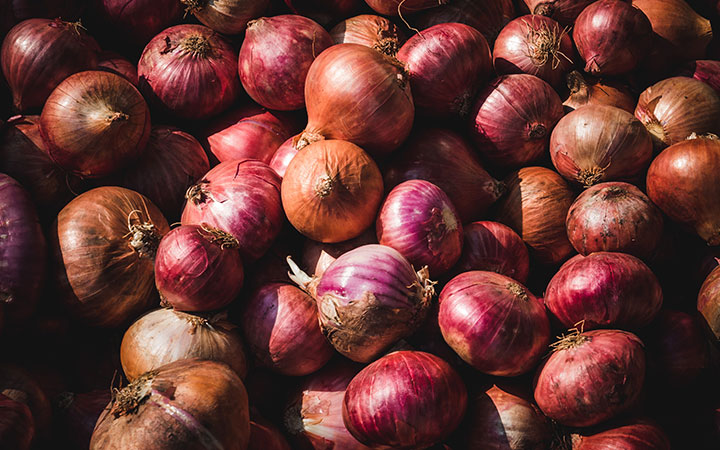 As most of you very well know, the mystery to multistate Salmonella onions outbreak that sickened 396 people is ‘Onions’. After a month of its identification and countless interviews with ill people, CDC finally declared the culprit behind it all on 2nd August. The onions were sourced from a California farm and were distributed across US and Canada. Salmonella is quite common and so are these outbreaks but battling it in the middle of a pandemic is like a double dose for anxiety.

Although the investigation is complete, the outbreak isn’t yet over. The reason being many consumers are still not aware of the source and have the tainted onions in their kitchen. More illnesses might be reported because there is a time difference between when a person eats contaminated food and when he starts feeling sick.

Moreover, onions are such a versatile food. They are used in practically everything – garnishes, gravies, sauces, salads – literally everything. It would sneak into your food and you wouldn’t even know. They can be served by any food service establishment and the last thing to come to the mind would be, where are they sourced from. That makes everything more difficult – from consumers identifying the origin of the product to the interview process for traceback investigation.

The first recall in the outbreak was initiated by Sysco Corporation. It’s an American MNC and the world’s largest broadline food distributor. It supplies to wholesalers, retailers, restaurants, nursing homes and other food service operations. The recall was done only in Canada through the following Sysco areas: Calgary, Edmonton, Kelowna, Regina, Victoria, Vancouver and Winnipeg. The following products were removed.

Once the traceback information revealed the source of the outbreak to be onions from Thomson International Inc., they started recalling their products from both US and Canada markets. Initially, only red onions were implicated in the outbreak, so only a recall for them was initiated. But later all fresh, raw onions, including the sweet ones, were recalled due to a possible risk of cross-contamination at facilities.

The onions were distributed in all 50 states in the US. In Canada, they were mainly distributed in Alberta, British Columbia, Manitoba, Northwest Territories, Ontario, Saskatchewan, Yukon, but possibly to other locations as well.

Product Details of Onions Recalled in the USA by Thomson International Inc.:

The onions were sold under the following brand names:

The products recalled include all sizes including bulk and can be packed in mesh sack, carton or a box. These are the brand names under which they’ve been sold:

Both FDA and CFIA (Canadian Food Inspection Agency) are continuing with their investigation and additional recalls may follow.

Thomson International Inc. is based in Bakersfield, California. They are growers, packers and suppliers of fresh produce and sell to wholesalers, retailers and other food service establishments throughout North America.

How to protect yourself?

Can’t I just heat the onions to kill Salmonella?

After all, that’s what we do for raw meat and poultry, right? And that sounds logical as well. But onions don’t work in the same way as meat. And being Salmonella contaminated, there is a very high chance of cross-contamination. So, discard them without a second thought!

Why is there a rise in cases of Salmonella linked to fresh produce?

While we have mostly linked foodborne illnesses to poultry, meat, fish and dairy, more outbreaks have been linked to fresh produce in recent times. That’s because there has been an increase in consumption of fresh fruits and vegetables in Americans and also the tendency to not prepare food at home is increased. This means more fresh produce is grown, cut, diced and packed in a centralized location and distributed everywhere. This increases the chances of human exposure to food and hence, foodborne pathogens – which has exactly what has happened in this outbreak. In June, another foodborne outbreak linked to salad mix sickened 641 people.

Contamination can happen anywhere along the food chain. And that’s why it’s important to follow proper safety measures while handling food products.

Salmonella is a common foodborne illness that can lead to symptoms like diarrhea, vomiting and abdominal cramps. The symptoms start 6 to 73 hours after consumption of contaminated food. Most people recover within 3 to 7 days without any treatment. Children under 5 years of age, elderly and those with auto-immune disorders can suffer from complications. So, stay safe during this Salmonella onions outbreak.