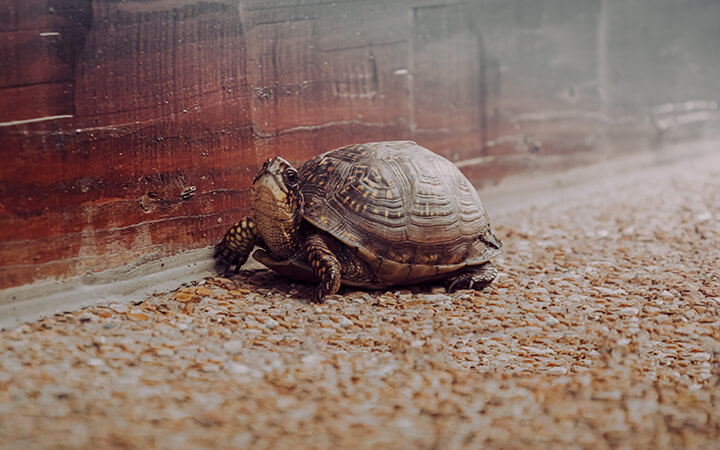 It’s the season for salmonella infections. Reports are coming in left and right. Almost a thousand people have fallen ill from pet chickens. Hundreds more have been stricken in an outbreak related to red onions. Restaurants like Si Casa Flores in Grants Pass have been spreading the bacteria too. But there’s a concern closer to home: Salmonella and Pet Turtles.

If you’ve managed to avoid getting sick so far, give yourself a pat on the back. Don’t rest for too long, however: there’s another outbreak of Salmonella Typhimurium, this time linked to small pet turtles. The good news is that the FDA has declared the outbreak over; the bad news is that you have to add turtles to your list of ways to get salmonella.

35 people fell ill. 11 have gone to the hospital. Thankfully, no deaths have been reported. Two thirds of the victims were small children. From the CDC’s page on the outbreak: “Ill people range in age from 1 to 71 years, with a median age of 7. Children younger than 12 account for 69% (24 of 35) of ill people. Sixty-three percent of ill people were female. Eleven hospitalizations were reported among the 31 ill people with information available. No deaths were reported. Of 30 ill people with ethnicity information available, 19 (63%) are Hispanic.”

The FDA actually prohibits the sale and distribution of turtles whose shells are less than 4 inches long. Some of those affected in the outbreak, however, reported that they’d been in contact with just such a turtle. Although they’re technically not legal, they can still be found for sale at swap meets, flea markets, and some online venues.

Only one of the samples of Salmonella collected by investigators showed resistance to antibiotics. The origin of the outbreak strain was confirmed via testing of the turtle in its environment at home.

If you’re worried about turtles and salmonella, we have some tips for you. There are steps that you can take to minimize the risk of picking up a bacterial infection from the turtle. The first step, which I hope you’re already familiar with, is the golden rule of avoiding illness: wash your hands.

Hopefully you’re already doing quite a bit of handwashing and are at this point an expert. Nonetheless, for the sake of completeness, let’s review here. Start with two hands. Add soap and warm water. Generate friction and a thick lather by rubbing hands together vigorously. Make sure that you get the spaces between your fingers, the backs of your hands, and the areas around the wrist. Continue for 20 seconds. Rinse with fingers pointed down.

Additionally, for the sake of completeness: don’t kiss turtles. Don’t snuggle turtles. If you have children and they’re interacting with turtles, try to make sure that they’re following all of these rules as well. Kids are prodigious hosts for salmonella bacteria, not to mention notorious turtle kissers and cuddlers, so it’s paramount that we keep an eye on them and have them follow the same safety precautions that adults are.

All of these same rules apply if you’re cleaning out the habitat that a turtle lives in: don’t touch the face, particularly eyes or mouth, until you’ve washed your hands. Be wary of where you put the turtle while it’s out of the cage, as well: you don’t want it wandering in the kitchen, for example, as that’s where food is prepared and thus the last place that you want salmonella.

Salmonella is one of the most common foodborne infections in the United States. It infects over a million people every year. Symptoms typically take six hours to six to develop, although in some cases they can take longer. Usually, the illness lasts for four days to a week — again, that’s a general guideline, and in some cases it can take longer.

For a healthy adult, a bout with salmonella is not usually life threatening. For the very young, those over 65, or individuals whose immune systems are compromised, salmonellosis can sometimes be a more serious affair. Individuals in those categories should take care to avoid infection. If they do fall ill, they should monitor their symptoms closely, and seek attention from a medical professional posthaste if it looks like things are going south.

A typical salmonella infection will feature many of the symptoms which we associate with food poisoning. That’s diarrhea, nausea, vomiting stomach cramps, muscle aches, and fever. If confined to the digestive system, it’s common for these symptoms to be self-limiting and for an infection to clear up on its own. Treatment is palliative, aimed at relieving the symptoms, and mostly involves getting a lot of rest and drinking fluids to replace what you’re losing from one end or the other.

Sometimes — particularly for those in the risk categories described above — a salmonella infection can become more serious. That’s the case if it makes it out of the GI tract and into the bloodstream, where it can cause a broader infection. Watch out for blood in the stool, vomiting that prevents you from keeping fluids down, or a fever that climbs up above 102.

In the meantime, stay safe out there! And be careful around pet turtles, Salmonella and Pet Turtles.