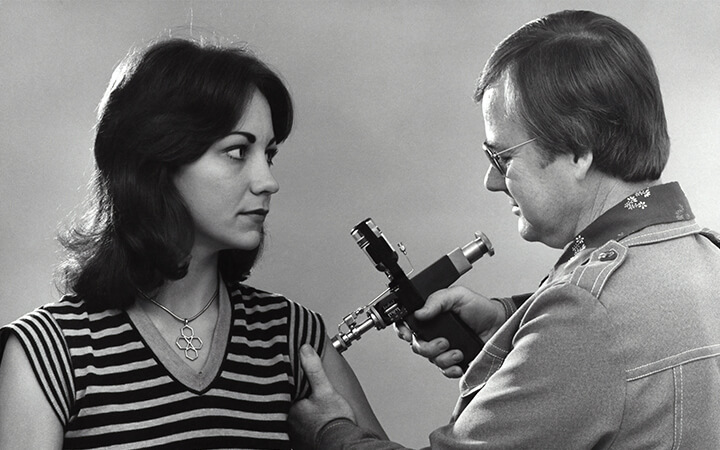 Salmonellosis is one of the most common causes of diarrheal illness in the world. It kills around a million people on the planet each year and around 400 in the US. Adhering strictly to food safety standards is essential to prevent it. But a lack of proper information, human errors and flouting food safety standards can all lead to Salmonella infecting livestock and eventually, humans. This is why a Salmonella vaccine is needed!

A common solution that pops in the mind is to kill the bacteria at the source i.e. in animals before they reach our kitchens. That’s what surged the use of antibiotics in food animals. Well, that and a soaring demand for meat products, which sick animals weren’t fit for.

This gave rise to an even bigger problem: antibiotic resistance. Overuse of antibiotics caused mutations in bacteria and the medicines designed to kill them, only made them stronger. Irony at its best! That doesn’t mean humans or animals became antibiotic-resistant, as some people believe. It’s the bacteria that has become resistant. And it will not be killed by those medicines, whether you give it to animals or humans. Scary, isn’t it?

Many strains of Salmonella have mutated to show resistance to 1st and 2nd generation antibiotics and are slowly moving up the chain. This is a serious concern. Yet another aspect to worry about is resistant Salmonella being used as a bioweapon – what happened in Oregon during Rajneeshee bioterror attack, the cult group distributed the bacteria through salad bars and salad dressings and sickened 1000 people.

These worrying aspects of bacteria leaves us with just one all-round solution – Vaccine! Vaccination is a perfect solution to the issue mainly because it will prevent large numbers of food animals from getting infected with just one shot. Once enough population is immunized, the spread of bacteria automatically reduces as there aren’t enough eligible hosts to infect.

In 2017, Agricultural Research Service (ARS) Scientists in Ames, Iowa developed a vaccine that protects food animals from both human and animal-disease causing Salmonella. The study was majorly focused on pigs and three most common types of Salmonella in swine. The vaccines being used earlier either prevented pigs from just one pathogen or reduced diseases in pigs but didn’t protect them against Salmonella that infects humans.

“Typhimurium is one of the most common causes of food poisoning in humans,” says Brad Bearson, microbiologist at ARS. “It’s also a common commensal organism in pigs, poultry and cattle.”

Commensal Salmonella is the one that lives in the intestinal tract of these animals without making them sick. But when it passes onto humans, it poses a foodborne risk to them.

Choleraesuis, on the other hand, causes severe disease in animals and kills them. It was the culprit behind some major outbreaks in the US and around the world in the 80’s and 90’s. “If an outbreak occurs, our vaccine can fight both the strains,” says Bearson.

Furthermore, the vaccine is also a DIVA – Differentiation of Infected from Vaccinated Animals. This means when producers test animals vaccinated with current vaccines, it comes out as positive. With this vaccine, the result will be negative, so they can know which animals got infected naturally.

The scientists are affirmative of the vaccine protecting against other Salmonella strains as well. They have filed a patent and will continue working on their technology.

Meanwhile, FDA has advised phasing out antibiotic use by resorting to natural means of strengthening the gut of farm animals by administering probiotics, prebiotics and synbiotics. These interventions are just a temporary solution and building a vaccine is crucial to prevent Salmonella in farm animals.

Right now, scientists and institutions all around the world are hard-pressed on developing a Covid-19 vaccine, earlier when the world was normal, there were significant contributions to Salmonella vaccine for humans. The last two major breakthroughs were when researchers at University of Texas Medical Branch developed an oral vaccine for Salmonella that produced significant immune response in mice after being administered with lethal doses of bacteria. This shows its promising potential for use in people in the future.

Another one was in September 2018, when researchers at University of California-Davis understood what T-cells offers optimal protection against Salmonella. For developing a vaccine, scientists study what antibodies and T-cell responses the body produces in an infectious disease. But there are two kinds of T-cells in the body – circulatory and non-circulatory. The latter was discovered afterwards, and since then scientists are studying immunology for infectious diseases to weigh down the significance of non-circulatory T-cell responses.

“We found that you absolutely need these non-circulatory T cells to protect against Salmonella,” said lead researcher Stephen McSorley. This is a crucial discovery for vaccine development as scientists need to know what exactly they are trying to induce with the shot.

The vaccines currently available only protect 50 percent of those being immunized. That doesn’t work in countries like Asia and Africa where many people, mostly children, succumb to diarrheal illness each year. More work is required in Salmonella vaccine development, but we are headed towards a positive direction and that’s wonderful!

In the near future, we will probably not have a universal vaccine for Salmonella that will be able to fight all its serotypes. But with research development, we may be able to attack the most common serovars or develop one to be effective to a certain degree in farm animals.

No doubt vaccines can reduce antibiotic consumption in farm animals. Some vaccines are already in use and with an increase in R&D, we can be assured that antibiotic use will go further down. With proper investment, we are moving towards a sustainable form of agriculture all over the world, with a good, reliable Salmonella vaccine.