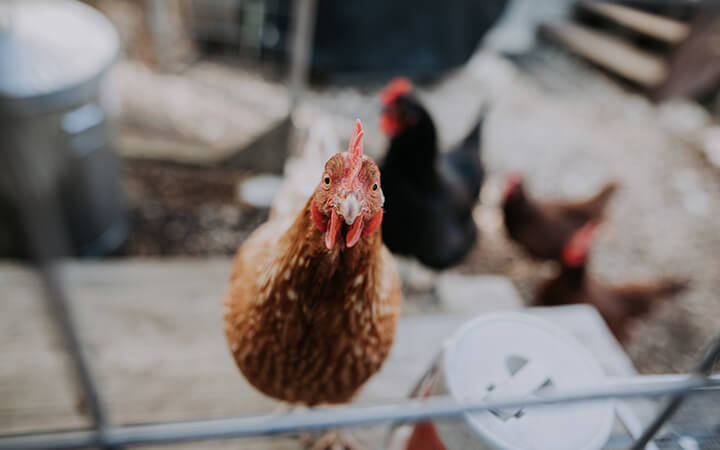 The CDC has put out an alert notifying the public of a number of salmonella cases linked to contact with chickens kept in backyards. The outbreak advisory, published on July 23rd, describes more than 200 cases in 44 different states. Only Delaware, Virginia, Maryland, New Jersey and the Dakotas have been spared thus far. Here’s what we know about these Salmonella Live Poultry Outbreaks:

Of the 212 individuals sickened in the outbreak, 34 grew ill enough to warrant hospitalization. Almost a quarter of those affected were younger than five years old.

Investigators conducted a series of interviews with patients to try and piece together whether these country-wide salmonella cases represented an outbreak with a common cause. 100 out of 132 patients interviewed reported contact with chicks or ducklings before falling ill. The various cases did not lead back to a single source. Instead, investigators found that the chickens believed responsible came from a wide variety of places; some were from feed supply stores or hatcheries, others were ordered online, and another portion had been obtained from family members.

The wide variety of sources on display here stand in contrast to another case of salmonella spread by chickens – a slow-burning outbreak from 2004 to 2011 described by a 2012 article from the New England Journal of Medicine. That event caused more than 300 cases across the country and was eventually traced back to a single mail-order hatchery.

According to the CDC, one notable feature of the current outbreak is that some of the salmonella bacteria isolated from patients are resistant to one or more antibiotics that are commonly used to treat them. 118 bacterial samples were taken to the lab, cultured, and examined closely by scientists: of the 112, 22 had genes lending resistance to one or more of the slate of drugs that are otherwise effective against salmonella bacteria.

That might not sound like much – it’s a bit less than one in five. But antibacterial resistance is a growing problem in everything related to agriculture and food. Chickens grow bigger and grow faster when antibiotics are mixed into their feed. Those antibiotics can promote antibiotic resistance for the bacteria in the chicken’s body; many bacteria who survive the drug are gifted with genetic mutations that lend resistance to it, and they can pass those beneficial genes onto the next generation of bugs. They can even share the bit of code that lends them resistance with bacteria to whom they are not directly related through a kind of genetic parcel called a plasmid.

The practice of using antibiotics to promote growth and ward off potential infection is more common in factory farm settings than it is the backyard, but salmonella bacteria don’t care. There are a multitude of ways by which a bird, an egg, a bit of feed, or a piece of resold equipment can move between these two venues, with salmonella along for the ride. If overuse of antibiotics continues and new drugs that kill bacteria through novel mechanisms don’t come onto the scene, the number of drug-resistant bacteria found in these outbreaks will rise, and the drugs we have on hand to combat them will steadily dwindle.

Chickens can pass on salmonella bacteria by interacting with other infected birds, laying eggs that hatch into salmonella-carrying chicks, or by inadvertently consuming the bacteria through feed. Birds with salmonella usually look healthy, but they pollinate the environment with their microscopic passengers as they go along, depositing salmonella bacteria in their droppings that is promptly churned up and further dispersed by the flock. You don’t necessarily have to touch a backyard chicken in order to pick up a bit of salmonella bacteria; stepping into their coop will usually do.

There are a number of cautionary steps that can be taken to ensure that infection with salmonella bacteria is less likely — even if you need to go muck out your own backyard coop tonight. The first and most obvious step is to wash your hands for at least 20 seconds with soap and hot water after interacting with chickens or their environment. Don’t forget to get the spaces between your fingers, scrub vigorously, and use a generous amount of soap.

We recommend getting some chicken gear, including gloves and a dedicated pair of shoes. If you’re doing heavier work, you’ll probably want to designate a shirt and pants as well. Keep these clothes apart from your other laundry; shoes and gloves should be kept outside or in a mudroom if possible. By segregating these clothes from the inside of your house, you reduce the likelihood of accidentally contracting pathogenic microbes like salmonella from your chickens.

Another thing you can do – don’t let poultry into the house. Take particular care to keep them away from bathrooms and places that relate to food, like the dining room, kitchen, and pantry. If you like to enjoy a nice evening dinner on your outdoor patio, don’t let them up there, either. You don’t want to be the latest victim of the Salmonella Live Poultry Outbreaks.