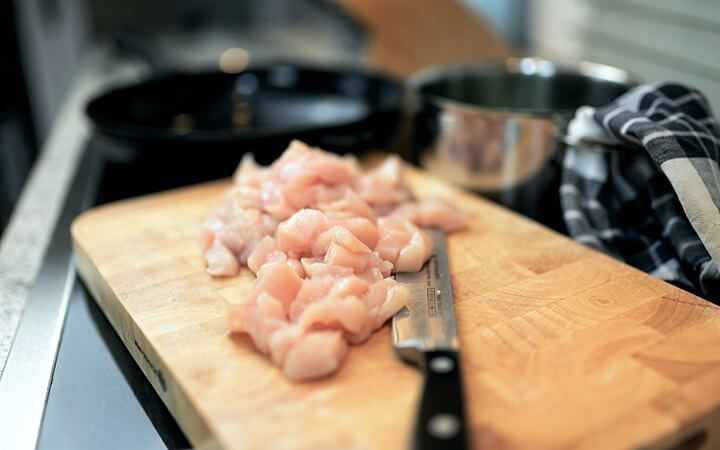 The very first thing we learn about chicken is to NEVER have it undercooked! Why? Because raw chicken has food poisoning bacteria lurking inside it. Remember the last time you had food poisoning? (Urghh) Then you probably want to stay miles away from raw or undercooked chicken. But what if some high-end restaurants bring raw chicken to your table instead? Just like raw fish, restaurants are now serving chicken sashimi or chicken tartare to their guests. Chicken Tartare Salmonella, much?

Believe it or not, the dish is a delicacy in Japan and served in many restaurants in Osaka, Tokyo, and Kyoto. Thankfully, the dish hasn’t caught on much in the country, but there are people who are giving in to the trend. But is raw chicken worth savoring? The general answer is NO.

Chefs at These Restaurants Claim Technique is Everything

The best-known spot to have this specialty in the United States is Ippuku restaurant based in Berkeley, California. The interior of the restaurant is such that you feel like you’re walking into Japan. And the menu has been designed the same way, featuring culinary delicacies from the country like yakitori, grilled squid, soba with shochu, and chicken tartare. Talking about risk mitigation, founder and chef Christian Geiderman says, “Freshness is really the key”. They source their chickens from small, controlled farms instead of large farms, so they know exactly when the bird was killed. Small farms also assure better hygiene and cleanliness in the surroundings. Moreover, sourcing it from a big farm means chicken goes through many hands, increasing the risk of contamination.

Once the chicken arrives, all they do is sear it in boiling water for 5-10 minutes and that’s the only cooking at Ippuku. The inspiration for Geiderman was a Tokyo restaurant run by his friends, where all upscale places have chicken sashimi on their menu.

Another way Giederman mitigates the risk factor for bacteria in chicken is by choosing the inner breast for the tartare. This part of the bird is the most well protected and has a lower chance of getting tainted by Salmonella in the digestive tract.

Apart from Ippuku, no upscale restaurants have caught the public eye for their raw chicken dish. Mostly because of the bad publicity associated with it. In 2004, Yakitori Totto in NY started serving chicken sashimi for a few years but stopped serving it because of consumer worries. Another popular Michelin-starred yakitori joint, Yakitori Torishin, in the city also stopped serving raw chicken because the city’s health department demanded poultry to be cooked to 165 degrees.

Depending on the health department rules and regulations in their state, many restaurants don’t even have the liberty to serve raw chicken to their guests. California is obviously an exception.

You must be wondering why eating sushi is okay, but chicken sashimi is not. Let’s just start by saying both have are somewhat risky to consume. Raw meat is frowned upon more due to a number of reasons.

Next, raw meat is also riskier because of the way it’s slaughtered and stored. Almost all of the dangerous microbes in meat live in the intestines of animals and not the muscle part that humans consume. If the butcher slaughters the intestine, any harmful microorganisms can spread to other parts of the body. Moreover, when meat is transported in bulk, just one contaminated part is enough to contaminate the whole batch. That’s why never eat a hamburger that’s red in the center. Fishes, on the other hand, aren’t ground or mixed so the chances of a tainted salmon or tuna contaminating others are low.

Also, raw fish can be infected with dangerous parasites, but it’s generally caught in cold waters and frozen before served. Two common parasitic worms in fish that infects humans are anisakiasis and tapeworm. Both of them are killed when fish is stored for a minimum of 15 hours at a temperature of -35℉. Good handling practices and chef’s talent are also necessary to make sure your sushi is safe to eat.

Bacteria in raw chicken doesn’t work this way and that’s why the idea of raw chicken is balked at while that of raw fish is normally accepted.

Salmonella causes 1.2 million cases of food poisoning each year in the United States. It spreads through the fecal-oral route and that’s how it gets into our food. Anyone who eats food contaminated with Salmonella bacteria will start showing symptoms within 4-72 hours. Most people will recover without treatment within 4-7 days, for high-risk individuals like the elderly, children aged below 5 years, pregnant women, and those with compromised immune systems, this illness can cause complications.

Campylobacter causes 1.5 million illnesses in the US each year. More cases occur in summer than winter. Common symptoms are diarrhea, fever, and abdominal cramps. The incubation period is between 2-5 days and the illness can last for around a week. In some people, complications like irritable bowel syndrome, arthritis, and temporary paralysis can occur. Most people will recover without any antibiotic treatment.

C. perfringens is a spore-forming, gram-positive bacterium that sickens around 1 million people in the U.S. each year. The illness starts suddenly within 6-24 hours of eating contaminated food and lasts for only a day. It only causes diarrhea and abdominal cramps (no fever and vomiting). Oral rehydration is a must when you’re ill. The very young and the elderly can suffer from the severe disease that lasts for more than a week and requires hospitalization.

Is Raw Chicken Worth It?

Well, being a community, whose main goal is to protect you and your family from any foodborne illnesses, we would say no! But if I met you in person, I’d say no again. It’s not something worth risking your health for. Chicken tastes best roasted, grilled, and cooked at proper temperatures, so let’s stick to that. Keep the Chicken Tartare Salmonella at bay.