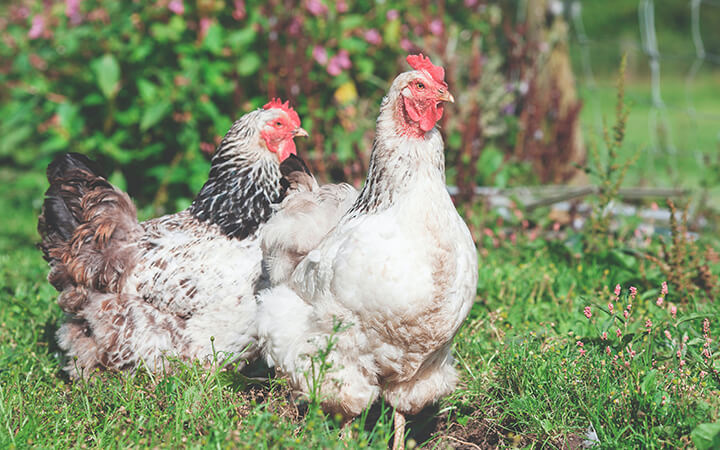 Salmonella is one of the most common foodborne illnesses in the United States. You can get it from red onions, lettuce, sprouts — even from nut butters like peanut butter. And guess what? Backyard Chickens. Backyard Chickens Salmonella outbreaks sweep the nation every year.

Backyard chickens are the driving force behind 15 outbreaks of salmonella that have swept across the United States. That’s the word from the CDC. As of this writing, 473 people have been infected in 48 states, 151 have been hospitalized, and one person in Oklahoma has died.

These outbreaks are long-term. The first confirmed case was on the 14th of January. The most recent one was on the 14th of July. The age range of those affected is broad, from 1 to 94 years old. It also skews youngish, with a median age of 34, and slightly female, at 56% of the total victims registered thus far.

This is only one set of several different salmonella outbreaks that are happening concurrently in the United States. We can distinguish them from other outbreaks of salmonella based on a couple of major factors. The first is genetic: we can tell if viruses are related to one another by looking at their DNA. The more they share, the more closely they’re related, the more likely it is that they’re coming from the same place.

The method by which the outbreak is distinguished is a bit simpler: talking to people. Investigators at the local and state level conducted follow-up interviews with a number of people who had fallen ill with salmonella. They asked about what people had eaten and what sort of activities they’d done in the days leading up to them getting sick.

Of the 409 people that public health officials talked to, 303 reported that they’d had some contact with chicks and ducklings. The animals came from various sources: some had been ordered online, some had been purchased from agricultural stores, some had been picked up from hatcheries.

Following the interviews, investigators went out to swab backyard chicken coops in Oregon and Kentucky. The CDC reports that three of the strains which ill patients had tested for were also found in the backyard coops.

It’s one matter to try and contain salmonella in the environment of commercial agriculture. Those spaces are subject to inspection by the USDA; they can be sanctioned or shut down if their chickens are unsanitary or found to be spreading disease.

Backyard chickens, on the other hand, are not so easy to regulate. Luckily, those in the know have put out a number of tips as to how you can avoid contracting salmonella from them. The first tip is the golden rule of food safety, the best method we have for avoiding contagion: washing your hands, especially after you’ve touched your chickens, coop, or eggs. It’s something that, in the year 2020, we should all be very practiced at and knowledgeable about already.

Still, if you don’t know, or if you need a refresher, here’s how you do it. You need soap and water, preferably hot water – be generous with both. Rub your hands together vigorously for at least 20 seconds to get a lather going. That’s about the time that it takes to sing happy birthday to yourself two times over. Make sure that you get all areas of your hands, including the backs and the spaces between your fingers. There are different techniques, but this writer likes to rub their hands together as if they were Scrooge McDuck and had just seen a large pile of money.

There are some other important chicken safety recommendations. Kissing or snuggling chickens is out. Don’t touch them with your face or mouth. This is important even if you really love your chickens or are starved for affection otherwise.

Similarly, don’t let your kids touch or handle chickens if they’re younger than 5. If they’re older than 5, don’t let them interact with the chickens unsupervised, and make sure that they aren’t kissing or snuggling, and that they wash their hands afterwards just as you would. Children are ready vehicles for the spread of salmonella, so it’s important to ensure that they’re taking the same safety precautions as everyone else.

You should set aside chicken equipment that is stored outside the house. The CDC recommends designating a pair of chicken shoes to be worn when you’re in their coop or area that are kept in the mudroom or outside of the house entirely. Other chicken stuff should stay outside, too.

Finally, watch out for chicken eggs. Collect them often and throw out any eggs that are broken or look suspect. When you collect them, clean them — the CDC recommends sandpaper, a brush, or a cloth to get any dirt or junk off the shell. Refrigerate the eggs in order to slow the growth of germs, and make sure that you cook them thoroughly when you get around to eating them.

Oh, and speaking of eating: don’t let chickens into your kitchen. Don’t let live ones in, anyways. For chickens that have already been slaughtered, it’s probably too late. They’re safe to go in the fridge. But any that are still alive should stay away from where food is prepared. Quite frankly, they shouldn’t be in your house at all.

We’ll keep you updated on these outbreaks as they progress. Backyard chickens are a perennial source of salmonella, so this probably isn’t the last time that we’re going to see a situation like this. Backyard Chickens Salmonella outbreaks happen every year. Stay safe out there!